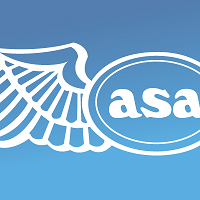 ASA was started as Merrell Aviation Ground School by Creighton Merrell in 1940. The company’s primary goal soon became the training of post-war military pilots returning from active duty to work in the early civilian airlines. Plotters, regulations and training manuals were the first products. In 1960, the company broadened its production and development efforts with additional pilot supplies and books added to the ground school training line.

In 1969, the company became Northwest School of Aviation under a new owner, Roy Beech. The company’s goal was the franchise of the popular Merrell Ground School under the name “Aviation Seminars of America,” or ASA.

In November, 1976, Joe Cucchiari purchased the company. “Aviation Supplies and Academics” replaced Aviation Seminars of America as the name to go with the ASA acronym, and the company again broadened its product line to add cassette courses and new books and training materials. The company was incorporated in 1977. In 1981, Joe Finelli joined the organization, bringing 20 years of experience in printing and publishing with him. Publishing and manufacturing has since become the principal company mission.

In 1984, the sale of the ground school (Aviation Training and Research, Inc.) and the retail store (The Aviator’s Store) allowed all efforts to be directed towards becoming a major supplier of pilot supplies and educational material in the United States. In 1985 Mike Lorden joined ASA as Marketing Director. That year, ASA moved to larger quarters in Georgetown, and again to its present Coal Creek location in 1990 to provide more warehouse and office space. ASA is currently owned by Mike Lorden, General Manager and President.

The ASA FAR/AIM has been in publication since 1945, and the ASA Test Preps have been in production for more than 60 years. Since those early days, many products have been added to the line including textbooks, software, apps, online courses, videos, flight instructor tools, aviation maintenance technician materials, logbooks, flight computers (manual E6B and the electronic CX-2), aviation plotters, kneeboards, flight bags, and more. Additional pilot supply items and book titles are being added, as our team of Authors and Subject Matter Experts has continued to grow.

Aviation Supplies and Academics, Inc. does business as “ASA”. ASA is the leading publisher of aviation books and the largest producer of pilot supplies in the USA today, providing trusted materials for more than 76 years.